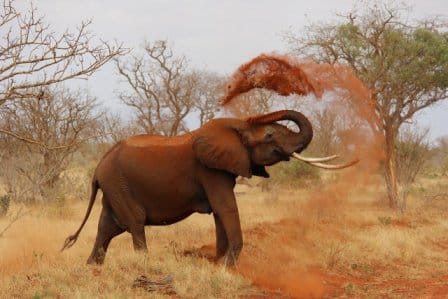 Tsavo East National Park is named after Tsavo river which flows through the park. It has a size of 13474 sq km and it is one of the largest game park in Kenya. It was established in 1948. Its located on the South Eastern part of Kenya and the distance is 333KM from the capital city Nairobi. Its habitat comprises of bushy grasslands, open plains, semi-arid acacia scrub, woodlands and swampy mash land close to the river. It is closer to the coastal towns of Malindi and Mombasa. This makes it an ideal park to finish a safari before proceeding to the beach.

Regarding weather, the temperature in Tsavo East National Park is fairly constant year round, but the rainfall varies. The tropical temperature ranges from 27-31°C (81-88°F) in the daytime and 22-24°C (72-75°F) at night. The long rainy season in Kenya lasts from March to May and the short rainy season lasts from October to December.

Getting to Tsavo East National Park

It takes between 5 to 7 hrs to get to Tsavo West National park by road from the Nairobi. The park has four gates and they are Manyani Gate, Voi Gate, Buchuma Gate and Sala Gate. Roads in the reserve are fairly good and can be traversed by 2 wheel drive vehicles although they can be a challenge in the wet season and 4 wheel drive vehicle will be do better. It is also possible to get to the park using chartered flights (no scheduled flights) and there are over 19 airstrips which can be used.

What to see in Tsavo East National park/ Attractions

Tsavo East National Park has vast herds of dust red elephant, Rhino, buffalo, lion, leopard, hippo, crocodile, waterbucks, lesser Kudu, gerenuk and the prolific bird life features 500 recorded species. It lions are characteristically short-maned lion and the elephants are huge tusked with reddish appearance because of color of the soil which they dust themselves with. Some of the special animals to be seen the park are long necked Gerenuk, Somali ostrich and grevy zebra most found in the Northern Kenya.

The Yatta Plateau which is a 300km ancient lava flow, that stretches along the east and north bank of the Athi-Galana. Its geomagnetic qualities are believed to play a role in guiding migratory birds and large numbers of Palaearctic migrants can be seen in the area.

Lugard Falls are a group of short falls and steep rapids on the Galana River and where a harder rock  impedes the river’s progress creating a bottle neck. Along the river is downstream is Crocodile Point, where the big reptiles can often be seen basking in the sun.

In terms of Flora, two trees dominate Tsavo East National park. The Baobab which is an iconic tree of the park and the doum palm which has edible dates.

The fees have been reduced during this Corona pandemic period.

They are currently at