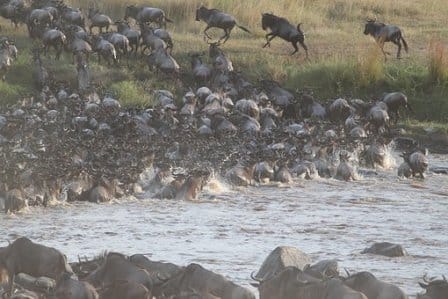 THE WEATHER IN MASAI MARA

Masai Mara’s altitude causes its climate to be cooler and wetter than most people expect it to be. Situated at an altitude varying from 1500 to 1900 meters, pleasantly warm daytime temperatures and much cooler nights can be expected.

The dry season usually starts in June and ends in October. In these months rainfalls are almost non-existent, the air is dry and the temperatures are not high.

This are the best times to be in Masai mara. It is typically sunny but not very hot. Early morning game drives can be chilly.

The wet season starts in November and goes on until May. January and February can experience little or no rains.  Days are often overcast, with showers in the afternoon. The mornings are chilly with temperatures around 13°C (55°F).

ATTRACTIONS IN MASAI MARA NATIONAL RESERVE AND THE GREATER MARA

Nowhere in Africa is wildlife more abundant like in the Masai Mara national reserve. It is one of the best destinations in the world for wildlife viewing in their natural environment. There are over 95 species of mammals, amphibians and reptiles and more than 400 birds species recorded in the reserve. The reserve is famous for the annual wildebeest migration that occurs when more than two million animals arrive in Masai Mara from Serengeti in July and go back in October. All members of the big five are found in the reserve.

Game drives are the most popular way of viewing wildlife in the Masai Mara. There are also other ways methods  including hot air balloon and nature walks. Other popular activities include photographic safaris and cultural experiences. Night game drives is not permitted in Masai Mara national reserve. Some of the private conservancies do have night game drives.

It is on the southwestern part of the Masai Mara national reserve. An organization called Mara conservancy manages it on behalf of Trans Mara county. The mara river divides it with the Masai Mara national reserve. It is less crowded with with a fairly very good concentration of wildlife all year-round. They include the big five,  plains game and many other species. It is one of the areas where herds of the Great Migration enter and exit the Maasai Mara National Reserve from the Serengenti National Park in Tanzania. This makes it one of the prime viewing locations for this wildlife spectacle.

The Conservancy is a private wilderness with an area of more than 27,500 hectares (67,954 acres). It is an important part of the Maasai Mara ecosystem on the north-western zone, bordering the Maasai Mara National Reserve. Mara North Conservancy is a not-for-profit entity established in 2009. The conservancy is a partnership of 6 camps, 3 lodges, 3 riding outfits and over 900 Maasai Landowners. Mara North Conservancy has one of the lowest tourist and vehicle densities in the ecosystem due to managed volume and strict land-use plans. Its purpose is to create a best practice, world-class conservancy with long-term commitments to the environment, wildlife, and local communities.

The private conservancy was created in 2010 and the size is 50,000 acres of community pastoralist and wildlife conservation area located in the Great Rift Valley, Kenya. It falls within the Greater Mara Region and was carved out of the Koiyaki-Lemek Group Ranch. Bordering it is the world famous Maasai Mara National Reserve to the southwest, the Olare Motorogi Conservancy to the west, and the Ol Kinyei Conservancy to the east. The Mara Naboisho Conservancy limits the number of beds per acre and also the number of tourists who may enter the area. This reduces the crowds of vehicles. With less crowd and vehicles, it provides spectacular unspoiled views of exciting wildlife. The Conservancy has one of the highest densities of lions in Africa and boasts of impressive herds of elephant, giraffe, wildebeest, and zebra. It is also home to Kenya’s rare wild dog. The conservancy is not governed by the same rules that apply to national parks, there is the flexibility to experience something things not possible in the Masai Mara National Reserve like night game drives and driving off the tracks.

Olare Motorogi Conservancy is a partnership of over 300 landowners and five tourism service providers who are Porini Lion Camp, Kicheche Bush Camp, Mara Plains Camp, Olare Mara Kempinski and Mahali Mzuri. It offers an incomparable wildlife viewing experience in an uncrowded wilderness. With an astounding volume and variety of wildlife, the Conservancy offers some of Kenya’s finest wildlife viewing. Olare Motorogi Conservancy boasts one of the highest concentrations of big cats in Africa and over 300 bird species, including 50 different species of raptors. Game viewing starts at your lodges doorstep. High quality standards and low vehicle density provide a truly unique and exclusive experience.

The Ol Kinyei Conservancy was the first conservancy to be established within the Great Masai Mara Ecosystem. It is an area of 18,700 acre Kenyan wildlife conservancy belonging to  Maasai community  leased to be set aside for the purposes of wildlife conservation. The area is home to only two safari camps, the Porini Mara Camp and Porini Cheetah Camp, both of which accommodate a maximum of only 12 guests each at any given time. This arrangement provides an exclusive experience and also respects the principles of eco-tourism. Conservation efforts have resulted in a thriving population of wild animals. With a little luck, rare wild dog may be spotted during stay in the conservancy. Countless gazelles, zebras and wildebeests generally trek through the conservancy sometime between June and October during the great migration. Around January, during the lesser known Loita Hills Migration, between 100,000 to 250,000 pass through the Ol Kinyei Conservancy en route to the Naboisho Conservancy and the Olare Motorogi Conservancy. They also pass through this area on their way back to the Loita Hills.

The Mara River begins in Narok County (Kenya) and in ends in Mara Region and (Tanzania) into lake Victoria  covering a distance of 395 kilometres. Part of the river that is located in Kenya is 65% while 35% is in Tanzania. On the Kenyan side in Masai mara, the river merges with three tributaries which are the Talek, Engare, Sand and Engito rivers. On the Kenya Tanzania border, the river flows into the Serengeti National Park and is joined by the fourth major tributary, the Sand River. Mara river lies across the great migration corridor where ungulates migrate annually.  Nicknamed ‘the river of death’, the Mara River is known for its infamous role in The Great Migration. Each year, countless wildebeest descend Mara’s steep banks into the perilous waters below. They must evade a swarm of lurking crocodiles as they scramble to reach the other side. Tourists flock to the river from July to September to have a chance of witnessing this natural phenomenon.

ACTIVITIES IN MASAI MARA AND THE GREATER MARA

A host of activities that can be undertaken in the region. The activities include day game drives, night game drives, walking safari, filming and photography, hot air balloon safari, bird watching and Picnics.

Walking safaris is not permitted in Masai Mara national reserve. However, they are allowed in the conservancies. This are guided tours on foot where guests embark on slow paced, walks with the primary objective being to see different wildlife species in the bush. More details that are usually overlooked on game drives become more apparent from the slower pace and closer range. The walks are mostly done in the morning and evenings and brings about a different scope and sense of adventure.

This is an adventure that entails viewing wildlife while in a safari vehicle. A safari game drive can vary in length and distance, depending on individual preferences. Usually conducted in the early mornings or late afternoon. It is the most common way to view wildlife in the area.

This are also allowedonly in the consevancies.A whole new world of animal species (nocturnal) await you on a night game drive. It gives you a different perspective of the park and wildlife. It is a wonderful opportunity to spot predators and prey alike. The lights of the safari vehicle illuminate the dark world, unknown even to experienced safari adventurers. Spotting the nocturnal creatures who scuttle, feed and fight their way through the bush at night can be exotic and exciting as sighting larger mammals during the day.

This is one of the most sort after experience during a safari holiday. The early morning fresh air and a birds eye view of the expansive savannah plains teaming with wildlife is a sight to behold, as the hot air balloon floats in the sky. Balloon air flight in the Mara will give you a different experience. Gliding across savannah on your tour as the sun rises making the plains pink, you will see animals congregating in their hundreds in the early morning.

Masai Mara is a great bird watching site with more than 400 species recorded. With a daunting 47 species of birds of prey, the  treetops, bushes and skies are a feast for birdwatcher’s eyes. In terms of size, these savannah birds range from bieng big, such as the world’s largest bird the ostrich, to tiny sunbirds  which are hard to spot with the naked eye.

Getting to Masai Mara National Reserve

It is also possible to fly to Masai Mara national reserve from Nairobi landing in any of the following airstrips determined by the location of your accommodation facility; Mara Serena airsrip, Musiara airstrip and Keekorok airstrip, Kichwa Tembo airstrip, Ngerende airstrip, Ol Kiombo airstrip and Angama Mara airstrip. You can also fly in from other locations like Samburu, Lewa, Nanyuki, Mombasa or Diani.