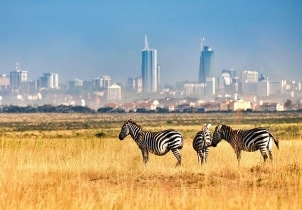 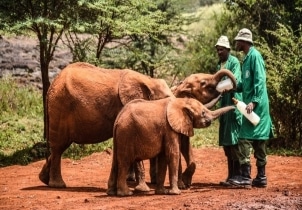 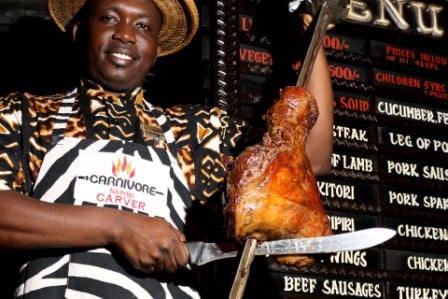 On this full day Nairobi tour, not only will you get to see some of the cutest baby elephants playing in a special orphanage, but you can also feed giraffes in an urban sanctuary! Plus, you’ll have the chance to see free roaming lions, leopards, cheetahs, rhinos, buffalos and hippos ant Nairobi national park.

A full day Nairobi tour. Looking to explore some of the amazing attractions that Nairobi has to offer? Secure a few hours out of your busy schedule and take a city tour! Visit Nairobi National Park for an action-packed game drive, the Sheldrick Elephant Orphanage to learn about conservation efforts, and the Giraffe Center to see the Rothschild Giraffe up close. There will also be a lunch break at Kenya’s famous restaurant, where you can try traditional roasted meats cooked over a huge charcoal pit. So come on down and explore all that Nairobi has to offer!

A short drive out of Nairobi’s central business district is the Nairobi National Park. It consist of open grass plains with backdrop of the city scrapers, scattered acacia bush playing host to a wide variety of wildlife including the endangered black rhino, lions, leopards, cheetahs, hyenas, buffaloes, giraffes and diverse birdlife with over 400 species recorded.

Best known for its work in protecting elephants, the Sheldrick Wildlife Trust (SWT) operates the most successful orphan elephant rescue and rehabilitation program in the world.  The orphanage bordering Nairobi National Park offers safe haven to orphaned baby elephants and rhinos rescued from parks and reserves in Kenya. It cares for the them, including hand rearing them until they are old enough to be gradually introduced back to the wild.

Breeding of the endangered Rothschild Giraffe is one of their main programs. The calves are then released into the wild at two to three-years-old when they are independent enough to survive. Visiting giraffe center is rewarding as you’ll get some great mug shots from the giraffe-level observation tower and also have a closer engagement with the giraffes.

Meats are roasted on traditional maasai swords over a huge charcoal pit that dominates the restaurant’s entrance. The rough-hewn beams combine the rustic feel of a rural setting with that of a medieval banqueting hall. Delicacies to enjoy include leg of lamb, pork, ostrich, rump of beef, sirloin, rack of lamb, spare ribs, sausages, skewered kidneys, even crocodile

You will be picked up in the early morning and driven to Nairobi National Park. Here you’ll be on the lookout for wildlife including buffalo, zebra, giraffe, ostrich, hyena and of course the big cats.

Depart the park at 10.30AM and head to the Sheldrick elephant orphanage to delight in the most adorable creatures feeding from giant baby bottles!

At around 1PM, it is time for lunch at the world-famous Carnivore Restaurant.

The afternoon promises more excitement and at around 2PM,we drop in at the Giraffe Center, home of endangered Rothschild’s Giraffes. On these stately grounds you can get up close and even feed these imposing creatures.

Later at around 5PM, be dropped at agreed location. 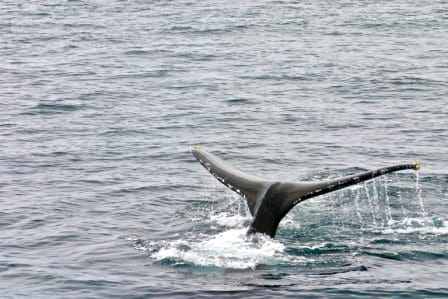 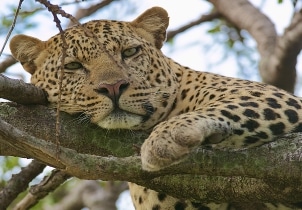 Our selection of Kenya’s top safari lodges and game reserves are guaranteed to suit your every taste. Explore three of most desirable locations in this whirlwind luxury safari. Experiencing an authentic African trip in the midst of wildlife and nature is most people’s dream. Rich diversity of vegetation and topography offers ideal game viewing opportunities. The lodges in Amboseli and Masai Mara are located deep inside the parks offering the thrill of being surrounded by wildlife. The one in Naivasha is located at the shores of lake Naivasha. 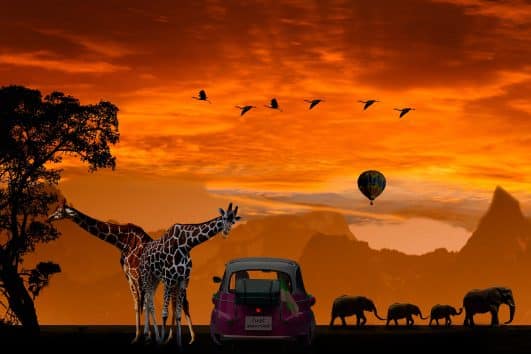 This exclusive 15 days Kenya Honeymoon safari offers a unique set of private activities and experiences, themed in romance, ensuring an unforgettable honeymoon experience. Combined with thrilling safari, wilderness adventures and relaxation at the beach, it will create memories to last a lifetime.