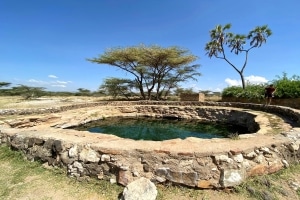 Buffalo Springs national reserve was established in 1948 as part of Isiolo Samburu game reserve but gained full rights in 1985. It covers an area of 131 square kilometers. The Reserve is south of the Samburu National Reserve and is named after an oasis of clear water at its western end. It is a place of dramatic contrast in which rare wildlife and diverse birdlife reside with gently rolling lowland plain of old lava flows and volcanic soils of olivine basalt. The main feature is the Champagne Ride in the southeast, an ancient lava-terrace.

The climate in Buffalo springs national reserve is hot, dry and semi-arid. Nights are usually cool. The average daytime temperature is 32°C/90°F, while the average nighttime temperature is 16°C/61°F. The reserve can be visited year round. The springs see some heavy local traffic in the dry season that is June to September. This is the best time to visit for wildlife watching. If you’re after some lovely scenery, you may want to drop by in the wetter months. This is when rain clears the air of dust, and the vegetation is beautifully lush.

Along the Ewaso Ngiro is a narrow band of riverine forest which includes Tana River Poplar, Doum Palm and magnificent specimens of Acacia Elatior. Vegetation includes acacia tortilis woodland and large stretches of bushland dominated by Commiphora. In some areas lava rock is exposed, with scattered grass and shrubs. Other parts have alkaline grasslands with occasional springs and swamps. Here and there the “Desert Rose” it is found in the scrub, with bright pink blooms. The Salvadora Persica shrub provides food to elephants, and its twigs are used as toothbrushes by the nomadic Samburu people.

Wildlife here include the endangered Grevy’s Zebra. Other species of mammal are reticulated giraffe, the African bush elephant, oryx, gerenuk, African buffalo, lion, leopard, cheetah and hyena. Over 365 species of bird have been recorded in the reserve. The river is home to hippopotamuses and crocodiles. Somali ostriches are widespread within the national reserve.

They include the following;