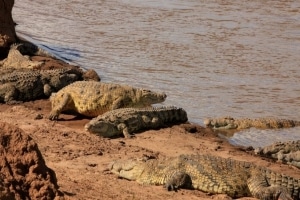 Sibiloi National Park is located in the wild and rugged shores of Lake Turkana, the cradle of mankind. Sibiloi is home to important archaeological sites including Koobi Fora where fossil remains were discovered by scientists and researchers such as Dr. Richard Leaky and have contributed more to the understanding of human evolution than any other site in the continent. The most famous remains from the park are the Australopithecus and early Homo fossils. The park was gazetted in 1973 and named a world UNESCO heritage site in 1977.

The climate in Sibiloi National park is scorching hot and arid especially in the months of December to March. The months of June and July are the coolest. In May to September, very strong winds blow both morning and evening. Rainfall here is less than 250mm per annum and in some places it may not rain for several years.

The area is characterized by semi-desert habitat and open plains flanked by volcanic formations including Mount Sibiloi, where the remains of a petrified forest can be seen. The habitat supports a distinctive number of birds, small mammals, and reptiles which are adapted to the environment.

Wildlife species within Sibiloi national park are adapted to its environment and they include burchell’s and grevy’s zebras, grants gazelle, beisa oryx, topi, lesser kudu, cheetahs, lions and a good number of crocodiles can be seen along the central island and in Lake Turkana. Central island is one of the major concentration areas for flamingos.
Bird species that can be sighted include Somali ostrich, Kori and Heuglin’s bustard, northern carmine, Somali bee eater, chestnut bellied sandgrouse, fox kestrel, ducks, pelicans, taita falcon, black tailed godwit and many other bird species

Attractions found in Sibiloi national park include the following;

There are several activities that tourists can engage in on their visit to Sibiloi such as Archeological safaris, Bird watching, Camping, Fishing, camel rides, desert exploration, culture visits, bush walk and Game viewing.