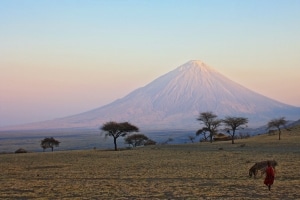 Ol Donyo Sabuk national park is positioned in the Kyanzavi division in Machakos County in Kenya, 65 km (40 mi) north of Nairobi. It was established in 1967 on an area covering 20 square kilometers of green panoramic view of perfect ambience and intriguing scenes composed of mountain OI Donyo Sabuk raising to a height of 2,145 meters. It provides great views at the summit for Eastern and Central Kenya province. The mountain is the highest peak in the park. The park was named out of this mountain OI Donyo Sabuk, which means “large mountain” in Maasai language.

Lord William Northrop McMillan, an American born Kenyan settler, adventurer, and philanthropist settled at Ol Donyo Sabuk national park. After his death in Nice, France in 1925 at the age of 52, his body was returned to Kenya and was buried at a site chosen by him prior to his death on the slopes of Ol Donyo Sabuk. The historic site lies about seven kilometers along the road that lead to the summit of the mountain. The place is not only host to the remains of Sir William but also his wife, her maid and the family dog and is a tourist attraction site.

In Ol Donyo Sabuk, the months of January to March are hot and dry, April to June is hot and wet, July to October is very warm and dry while the months of November and December are warm and wet.  Activities like game watching, hiking, nature walks, and mountain climbing are easier in the dry season.

Ol Donyo Sabuk national park is covered by the dense forest vegetation that is known by the Kikuyu locals as “the Mountain of the Buffalo” The ecosystem constitutes a mountain which is entirely covered with dense montane forest except for a small area at the top.

The park offers a good ecosystem which is home to a wide range of birds and wildlife species mostly large herds of buffalos and other animals like Bushbucks, Leopards, Olive Baboons, Porcupines, Aardvarks, Mongoose, Pythons, monitor lizards and over 45 bird species. Some of the bird species include white –browed sparrow weaver, grey-headed sparrow weaver, African pied wagtail, Augur buzzard, Mourning dove, African hawk eagle and purple-breasted sunbird among others.

Ol Donyo Sabuk national park is home to a wide range of attractions that guests can enjoy while on their safari. Below are the highlighted attractions in the park.

On your visit to the park, you can do camping since camping sites are available including Turaco Public campsite, Rock Hyrax and Summit Campsite. There are also comfortable hotels and lodges that tourists can sleep in on their visit to the park including; Chania Tourist lodge, Trade Winds lodges, Cool Tavern House and Blue post Guesthouse.