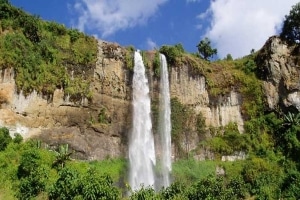 Mount Elgon National Park is a UNESCO Man and Biosphere Reserve located in western Kenya, home to lush green highlands, rolling tea plantations, lush swamps and equatorial rainforests. The park is named after Mount Elgon, an extinct shield volcano on the border of Uganda and Kenya and the second highest mountain in Kenya. Mt. Elgon national park covers an area of 1,279 square kilometers. Mount Elgon National Park is uniquely split down the middle by the Kenyan-Ugandan border. The Ugandan part of the park covers 1,110 km2 while the Kenyan part covers 169 km2 The Kenyan part of the park was gazetted in 1968, the Ugandan part in 1992.

Mount Elgon is 50 miles (80 km) in diameter and features five separate peaks.  The highest point is the Wagagai peak, In descending order, the remaining peaks include: Sudek 14,114 feet, Koitobos 13,852 feet, Mubiyi 13,816 feet, and Masaba 13,652 feet. The highest and two lowest peaks are actually located in Uganda with the second highest being right on the border and shared between Kenya and Uganda.  Koitobos is the third highest peak and the only one solely in Kenya.

Mount Elgon has moist to moderately dry climate. It is a water catchment area. Mount Elgon national park is open to tourists all year round. However some seasons provide a better experience than others. The dry seasons run from June to August and from December to March, although rain can be experienced at any time.

Although the park is fairly small, it features diverse habitats which include savannah, montane forest, woodland, and alpine moorlands. The vegetation varies with altitude. During the months of June and July, Mount Elgon National Park is renowned with locals for its abundance of wildflowers that blanket across the moorlands.  Orchids are one of the flowering highlights.

Attractions in Mount Elgon national park include the following;

Mt. Elgon national park is dotted with caves formed from ancient lava tubes namely Kitum, Making’eny, Chepnyalil ,Ngwarisha and many others some of which are outside protected areas. These caves were formed by moving lava and erosion of soft volcanic deposits with the most accessible being the kapkwai caves can be seen within the national park. The caves were used as shelters for the locals and their livestock. Old cave paintings can be seen along the walls of the caves. Many bats live along the walls of these caves.

This attraction is seen by the tourists who hike to the top of the mountain where the caldera is found. It was formed as a result of magma being drained from the chambers of the mountain which formed a volcanic cone that later collapsed forming the depression.

Wildlife and bird species which can be sighted during a tour in Mount Elgon national park include the endangered lammergeyer, antelopes, forest monkeys, elephants, buffalos, defassa, waterbuck, oribi, bushbuck, duiker, forest hog, bush pig, civet, serval cats, aardvark and many other animal species. Bird species that can be sighted include the moorland francolin, mustached green tinker bird, and alpine chat, black collared Apalis and many other bird species

Activities for tourists to engage in during a trip to Mount Elgon national park include the following;

Accommodation facilities can be secured within and outside the park. Most of the hotels offer a combination of luxurious, mid-range and budget rooms. The luxurious hotels facilities are found in Mbale town, Kapchorwa town and the Sipi Falls area. They include, Kapkawai Forest cottages, Mbale Resort, Mount Elgon Hotel and Spa, Kavegi hotel, Mount Elgon view hotel, Noah’s Ark hotel, Masha hotel and Sipi River lodge.