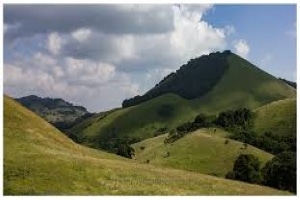 Chyulu Hills National Park was gazetted in 1983. The park is part of the Tsavo conservation area which covers Tsavo West National park, Tsavo East National park and the Kibwezi forest. The Park comprises the eastern flank of the hills and is operated by the Kenya Wildlife Service. The hills in this park hold no permanent surface water but rainfall that percolates through the porous rocks providing water to many permanent water sources in the surrounding plains. These hills are of volcanic nature and range from ash cones, craters as a result of volcanic eruptions which occurred over 240 years ago. Chyulu hills are also a water catchment area for Mzima springs, Tsavo river, and Galana river.

The park shelters indigenous vegetation which vary ranging from the forested area in the eastern part of the hills to the ungazetted western part of the Chyulu game conservation area which is owned by several Maasai groups. Different forms of vegetation can be seen dotted along the slopes of the Chyulu hills such as rough grassland and thicket, patches of montane forest as well as large tracts of forest. The dense thickets in Chyulu hills national park are also a water catchment area for wildlife, livestock and the neighboring communities as well as shelter for the different wildlife species in the national park.

Caves – Chyulu Hills National park is a good place to visit if you like exploring caves. The levithian tube (also known as Kisula caves) is about 11 km long. One of the longest caves in Kenya and also Africa. It is best visited during the sunny periods January to March and also as from June to September.

Wildlife – The park is like a dark kingdom of stealth and twist where the animals are quite elusive and challenging to encounter but on a good day, amazing sights should grab your attention.

Activities for tourists to engage in during a visit to Chyulu Hills national parks include the following;