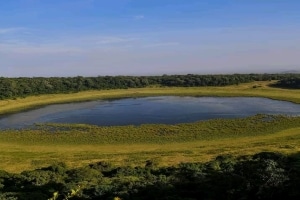 Marsabit National Park is a national park and nature reserve located at Mount Marsabit in northern Kenya near Marsabit town. It is located 560 km north of Nairobi. The Park is a refuge for huge tusked bull elephants, diverse birdlife and reptiles. The park was established in 1949, it spans 1554 square kilometers of mist writhed montane aura on the upper regions and semi arid bushland on the lower parts. The park consists of a forested mountain that rises like an oasis in the middle of the desert wilderness and is the only source of permanent surface water in the region. It has three spectacular crater lakes that provide habitat for a variety of birdlife. One of the lakes, Lake Paradise, is the most scenic and famous from early films and writings of Martin Johnson and Vivien de Watt Ville. Marsabit national park is also home to large herds of elephants. Perhaps the most famous elephant in the world Ahmed, Ahmed was known for his large tusks and put under 24 hour protection in Marsabit National Park by Kenya’s first president, Kenyatta.

In January to March it can be hot and dry, April to June experience a hot and wet season, July to October can be every hot and dry and November to December persists to be warm and wet.

The park is home to diverse wild animals such as Elephants, greater/lesser kudu, buffalos, Hynes, Kirk’s dik-dik, Grevy’s zebras, Reticulated Giraffes, Lions, Leopard, Peter’s Gazelles. Primates to see include Olive baboons, vervet monkeys, baboons among others. The cliffs in the northern end of Lake Paradise, in Gof Sokorte Gurda, are home to a number of birds, including Ruppell’s griffon vultures, peregrine falcons, mountain buzzards, black Kites and  African fish eagles. Ducks such as garganeys, southern pochards and teals are found on the lake, which is also home to red-knobbed coots, Hammerkops, Ibises, Purple Herons, and Yellow-billed Storks.

There are several activities that tourist can undertake on their visit to Marsabit national park which include the following;

There is accommodation within the park but there are plenty of overnight options from Marsabit town near the park, they include; Ahmed campsite and Abdul campsite where camping is offered inside the park, Camp Ndotto, Jirime Hotel and Resort and Nomads Trail Hotel.